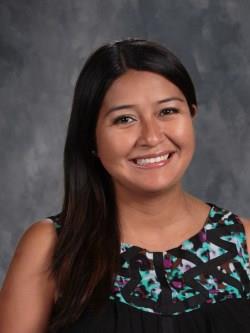 Ms. Sandoval Moreno was born in Durango Mexico. She moved to Houston, TX when she was 6-years-old. It is at Crockett Elementary where she began formal music studies. Later on, she enrolled at Multicultural Education and Counseling Through the Arts (MECA) school with teacher Alfonzo Guerra to continue her violin and mariachi music studies. Her motivation led her to audition to Johnston High School where she was accepted and was part of the school's orchestra and mariachi band. She was then recognized as the best mariachi student in 2000 at age 14. Simultaneously, she participated in the Mariachi Vargas Extravaganza, as a member of MECA's mariachi, where she took first place for her performance.

Later on, she studied classical music at High School for Performing and Visual Arts (HSPVA), performing in New York, and the Olympic Winter Games in Utah as part of the school's orchestra. She also performed at the Encuentro Internacional del Mariachi in the city of Guadalajara, Mexico. Through her career, she has played along renowned artists such as Beatriz Adriana, Pablo Montero, Yolanda del Rio, Jenny Rivera, Lola la Trailera, Pepe Aguilar, Irma Infante, Amanda y Diego Vergaguer, and Pesado. She has also had the opportunity to travel and perform in the United States, Mexico, China, Canada, and Cuba.

Ms. Sandoval Moreno earned a Bachelor of Arts in Music Education degree at Houston Baptist University. Prior to teaching at GPFAA, Ms. Sandoval was the mariachi director at Kennedy and Arnold Middle school in GPISD, in which both mariachi groups won best in middle school at the GPISD four annual mariachi festival. She also taught three years at Burbank Elementary Finer Arts Magnet school in Houston, and was a founder of their mariachi program. Her goal is to develop musical independence in your child while promoting inventiveness, accountability, and leadership.

She is now staring her seventh year focusing on educating the younger generation. She considers it a great privilege to be your child's music teacher this year, and she looks forward to meeting each of you. Ms. Sandoval Moreno continues to perform mariachi professionally and happily resides with her husband Alvaro Moreno in the Dallas area.