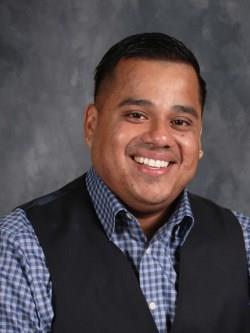 Director of Choral and Vocal Activities

Mr. Joel Duarte is in his 8th year as a choral director in the Grand Prairie Independent School District. He graduated from Wayland Baptist University with his Bachelors in Music Education. He is currently working on his Masters in Music Education at Southern Methodist University. He brings a wealth of experience to stage through producing his own choral productions, participating in and placing in National Association of Teachers of Sing Competitions, as well as traveling the globe performing with the Dallas Symphony Chorus. Mr. Duarte is a sought-after clinician across the state. He has served as a guest clinician for honor choirs performances and preparatory clinics for Contest and Festivals.

Choral programs under his directions consistently earn sweepstakes at UIL contest and annually earn places in TMEA District, Region, and All-State Choirs. He was particularly proud of his 9 Texas All-State Choir students this past year. In the Spring of 2017, Mr. Duarte took his choir beyond the state and national lines touring Italy and competing at the Verona Choral competition, where they received the Silver rating. The choirs at GPFAA have also been awarded “Best in Class” at various music festivals across the country, recently winning the “Grand Champion” award at the Di Voce Festival-Dallas and the “Adjudicator” award in Nashville Tennessee.

The spring of 2019 will be a whirlwind as the Mixed Choir prepares to perform at the TMEA Convention as one of the 6A invited choirs. In addition, the Grand Prairie Fine Arts Academy Treble Singers have been invited to perform for the American Choral Director Association (ACDA).

Beyond his credentials as a performer and director, Mr. Duarte is tremendously passionate in his teaching and empowering students, the musicians of tomorrow.