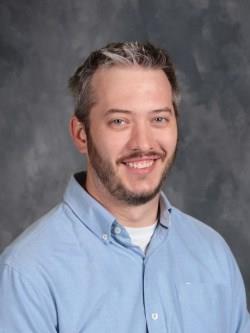 BFA in Theatre – University of Texas at Arlington

Jordan Fetter is a product of Grand Prairie and GPISD; attending Florence Hill Elementary, Truman Middle School, and graduating from South Grand Prairie High School. He then studied engineering at Oklahoma State University and graduating from the University of Texas at Arlington with his Bachelor of Fine Arts in Theatre Production and Design. After graduation he worked as a Project Engineer and Draftsman for Crown Corr. INC on the construction of the Cowboy’s Stadium in Arlington. After answering his calling to be a teacher, he began working with GPISD in the fall of 2006. Mr. Fetter began teaching Theatre and Speech at SGP. He then moved to Jackson Middle School where he lead the Theatre Department for 4 years and in his final year at Jackson he also served as the Fine Arts Department Chair. During the summer of 2012 Jordan was moved to the Fine Arts Academy at Grand Prairie High School as the Technical Director and helped open GPFAA in 2013.

Since 2007 Jordan has been very active in the local theatre community. He has severed on the Board of Directors of the Grand Prairie Arts Council, even holding the position of Vice President in charge of Programming, and Lighting Designer. Mr. Fetter also works with the City of Grand Prairie as a Lighting Designer and lighting/technical consultant. Since 2008 he has helped a number of students build their resumes by getting them work in the field of technical theatre. Some of his students have been: spotlight operators, stage managers, lighting and sound console operators, even electricians, set crew, costume and make-up, and house staff for local, community and civic theatre houses. Jordan has served in almost every capacity aspect of theatre production giving him the experience to hone the skills of young students, no-matter their talents. He loves what he does and is passionate about teaching his craft and inspiring students of all levels.

In December, Jordan and his wife Lindsay will celebrate their 12th year of marriage. Together they have two children, Scarlett who is 9 years old, Harrison, 6 years old, and Phoebe will be making her debut in Dec. 2018.